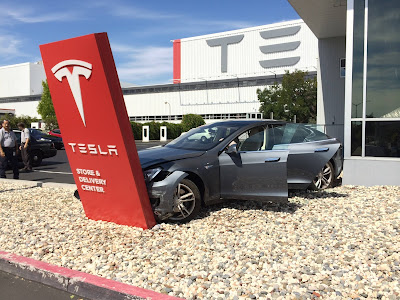 Apparently yesterday there was a strange crash at the Tesla Motors’ store and delivery center in Fremont California.  There have been conflicting reports as to what caused the accident, but as you can see from the photos, it did not end well for the unfortunate Tesla owner.

While some were speculating that the crash was caused by someone celebrating with too much champagne before picking up their new Tesla Model S, there is some evidence that the car was not just being picked up – and that the driver may have simply hit the wrong pedal when attempting to brake.

According to a couple of reports at Jalopnik, a witness reported that the driver did hit the wrong pedal when attempting to brake.  They also said that the car already had California HOV lane stickers attached, which would show that the car was at least a couple of months old.

Regardless, it is a shame to crash the best car on the planet – the Tesla Model S has also been called “The Magic Car”.